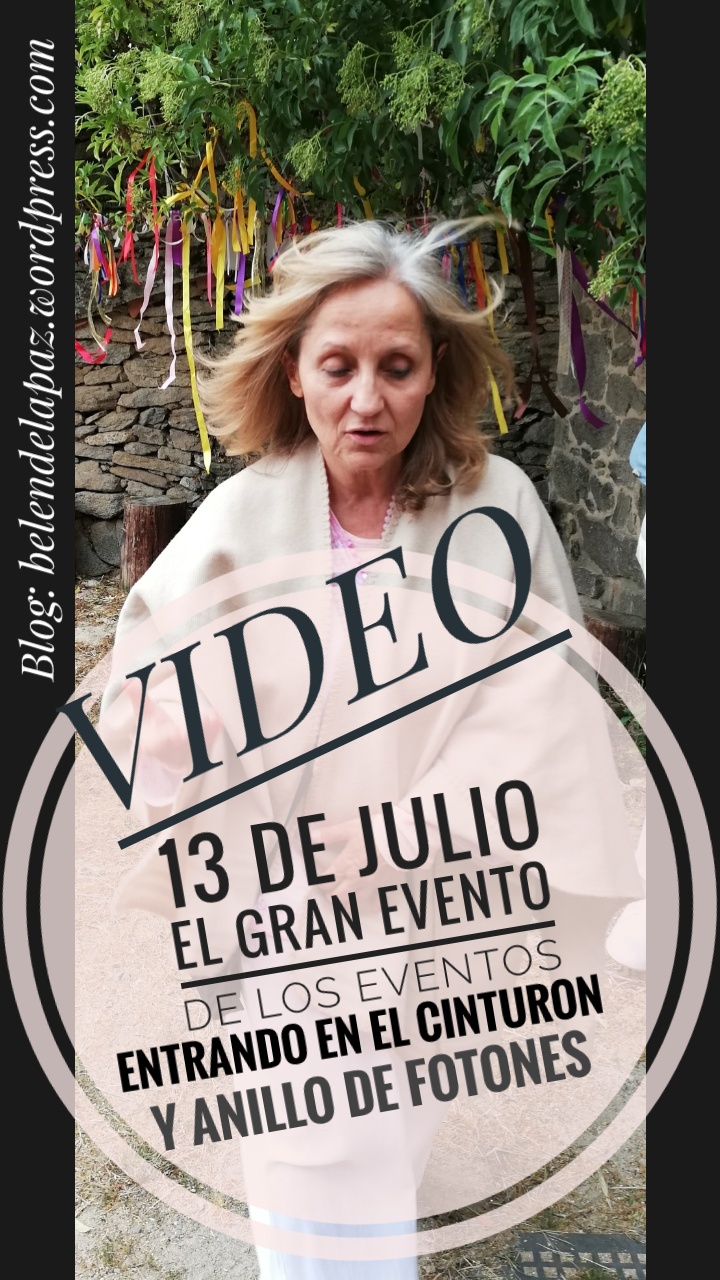 Something big is about to happen that can change our lives forever.

Our galactic imprint will change forever.

Before starting with the information I would like to inform you that I am going to give a workshop in Barcelona on June 30, 2019; and in order to celebrate the great event amongst events of July 13, I will be holding a meeting in the Shrine of the Mother, in the City of Light and underground city at “Luelmo de Sayago”. All the information you can find it in my blog:

On May 13, 2019 and as I explained in the video:»May 13, opening of 3 Portals and the great Sacred Seal», as it has been announced three of the seven gateways and the great seal opened up from that City of Light. The great sacred seal was teared opened to reveal the great events that are going to take place, as well as the information that needs to be disclosed through the new sacred codes that spans from the solar disk that has been activated and anchored in the Underground City of the Sanctuary in “Luelmo de Sayago”.

Our Earthly Universe is changing and moving into another Galaxy.

As soon as this year began Mother told me that the year 2019 was the year of the Great Fraternity and that when the time arrived intended for July 13, I should make a wide call about a gathering in “Luelmo”. The reason for this is that from that Shrine of the Mother and Spiritual Center for Healing, activation and miracles, 4 large Gateways would open for enabling the connection of the 4 large Portals to Earth. This will complete the 7 gateways that are due to open this year 2019. That particular location is already a great underground City of Light which has been activated and anchored in that sacred and blessed place.

On this year July 13 happens to be a galactic portal activation day, as well as also being  the 102 anniversary of the third apparition of The Mother in Fatima.

On July 13, 2019 as I was saying, from this place, the four gateways that will end up connecting Mother Earth with the great portals of unification with the advanced worlds of the Confederation of Light will be opened from here. These gates will be connecting our planet with the passageways and paths that link us to higher universes and dimensions than those we have known so far. That will mean a great expansion and cleansing as I have explained in my video: «The great expansive wave of summer 2919 / Get ready World, World Get ready». This will bring a deep cleansing and expansion including big rapid movements that will translate into order in the chaos and light in the darkness, for the fast elevation of the planet to take place. As I have been saying previously there will be a price to pay, therefore the outbursts, movements, and convulsions will be present.

On the day of the summer solstice I was informed that seismic and quake activity is going to intensify in our planet and that the Earth is on standby and in a state of emergency.

On July 13, planet Earth is going to enter fully and impact the band of the photon belt, and the impact is going to be impressive.

The photon belt, the ring and bandwidth of photons moves orbiting in the space composed among other things by an infinite number of stars. On July 13, 2019 the Earth will pass through that belt and the planet  will impact entering the belt fully and in depth. This is how I have been informed of it and made aware so that so that I can communicate it.

The implications to be expected in this occasion and crossing by  passing through the photon belt and with a more activated and charged band will be, the elevation of the planet and humanity. In addition to that, a percentage of humanity that is ready for it will be elevated to the New Earth and with their 12 DNA strands activated as I have explained in my previous video «The Summer Solstice Explosion». All of this great activation of the strands and DNA chain for elevation, activation and connection started to happen from June 21, summer Solstice Day.

The photon belt are the rings of Alcyone.  Alcyone is the great central Sun of the Pleiades. The photon belt and band is a radioactive ring. Writer and researcher Paul Otto Hesse, predicted that if the Earth is the first one to enter into  the belt, a great fire in the sky will be formed. However,  if the Sun enters first, the radiation released could interfere with the sun’s rays and the darkness would reign for 110 hours, after which everything would return to normal.

On June 23, in the evening and with the “Night of Saint John” getting closer; finding myself at the gate of the Hollow Earth, I could see a great fire in the sky through the passage of manifestation that I opened on that day at  the gathering I was enjoying here, in the City of Light at “Luelmo”, and this is what I can say in this respect.

The radiation of the belt and band of photons is tremendous, and on July 13 which is a Galactic Activation Portal day, will cover our Planet and the Earth will be enveloped by a luminous belt. That will be something extraordinary leading to great changes and transformations.

The radiation from this belt will alter the matter producing great changes in it, affecting also the rotation of the Earth. The time will change; the times will change.

The belt is radioactive; this radiation will act on the molecules.

With the four large gateways that are going to open on July 13 for the connection of the great portals to Earth, the connection ducts will end up attached to the Photon Belt through which we will begin to enter on this day July 13, which as Galactic Activation Portal day is going to give rise to the great event of events.

The energy of the 13th of July will be Red Magnetic Dragon, the power of birth, nurturing, the being, the entrance. GALACTIC ACTIVATION PORTAL.

This photon belt, according to writer and researcher Paul Otto Hesse, consists of the decomposition, division or breaking of the electrons that upon penetrating our planet with this radiation, all molecules and atoms of all the existent bodies will be excited undergoing with that  a transformation of great magnitude.

I have had a vision and I have been shown what will happen when this ring and belt would be penetrated so deeply and with the ring activated in all its splendor. I have seen how upon entering, that photon energy of radiation and also electromagnetic, when it penetrates into the matter of the Earth, everything will merge with the light of that frequency band of light. Above all I have seen how when penetrating in the humans, in our physical body, everything is going to be stirred up, activated and elevated in the human being. I have seen how these frequencies penetrated through their faces filling them with frequencies of light and making them shine with light. I have seen also how they penetrated through the physical body into the organs, entrails, bones, blood and reaching the cells, thus impregnating the human being with a frequency unknown to them.  The frequency, system and vibration in the human being are going to change in this manner forever and they will be  able to activate the 12 strands of DNA, and take them to a state of unknown frequency until now, bringing about a great explosion of light within their light body, enhancing them magnificently for and ever.

This great event will produce many changes in all forms of life, and it may even modify the geography of the planet in a short time. The entry of Mother Earth into the ring of Alcyone will produce a change of inclination in the polar axis affecting the equatorial line, and thus affecting  both hemispheres considerably.

In 1962 the influx and influence of the photon belt began to be perceived.

The photon belt is a huge mass of light and this mass of light as I was saying is going to be the vehicle to restore, activate and transform human DNA to turn it into the man and woman with new clothes, the new men and women of the New Earth transcended and elevated in those who did the required work of self-realization.

The Earth has been making entries into the belt between 1998 and 2001, but now on July 13 it enters fully beginning a new cycle of life, a new civilization and the opening of consciousness to unequaled depths, elevating and illuminating everything through its passage and transit.

On July 13 the divine will be opened and it will come into the human; miracles will begin to happen «en masse» and the earth will ascend spreading the seeds of Light and of the Greater Love.

Something big is about to happen that can change our lives forever.

Our galactic imprint will change forever leaving no trace of the previous one. Could you even imagine on a personal level what that could mean? This means erasing all memories, all karma, all karmic debt and positioning ourselves at the starting point in order to restart a new cycle from a new set of coordinates without the impairment and memory from the past.

The Mother on July 13 and from “Luelmo”, continues to lead the works of Love, opening up the four gateways and opening in turn the healing portals.

Your good luck is my good luck; we are on the brink of a great change running along the passageways.

Something great is about to happen that can change our lives forever.

Our Earthly Universe is changing, entering another Galaxy.

This is a project of Love that is being carried out because of Love and with Love.

Mission Project. A project in service and with the Heart.

We have created a heart of water where we can cleanse  our wounds from the soul, purify, connect and elevate ourselves.

The sacred waters of life.

I Belen de la Paz can raise the water to a high frequency and heal the world.

Queen of the Waters.

Donate to the Project

This is a portal opened to higher dimensions and connected to all the power sites of this planet and of the boundaries of the stellar universe. Here a City of Light has been anchored to Earth from very high dimensions; it is a beacon that guides, spreads and nourishes with Light. That is why this is one of the places on the planet from which these new and sacred information codes are being emitted, from the activated solar disk located at its center.

This Shrine is in turn connected with the highest frequency of the Universal and Cosmic Mother; a place of power and high healing, retreat and relaxation.

A place where miracles happen and spontaneous healing take place.

This sacred place is a luminous substation of the stellar universe for the greater good of all humanity; and the greatest good entail the unity of the spirit.

It has rooms to stay for individuals, as a family or as a group.  You can also organize your retreat, course or workshop in the great “Mother» room at your disposal. Your stay here can be personalized both individually and as a group.

WE ARE WAITING FOR YOU

Donate to the Project

We need your collaborations and donations to continue anchoring, making and activating this place, there is still much to be done.

Thank you all for your support and appreciated and valuable collaboration and contribution.

May Heaven and Earth unite for the greatest good of all.

A Project with Heart

PAYPAL (donations through paypal at no cost to the donor)

2º.- If you do not have an account open it (without cost) and associate your account number (total security)

3º.- Enter in «sending money» and write the mail address: belendelapaz@hotmail.com

Or you can make your donations through: